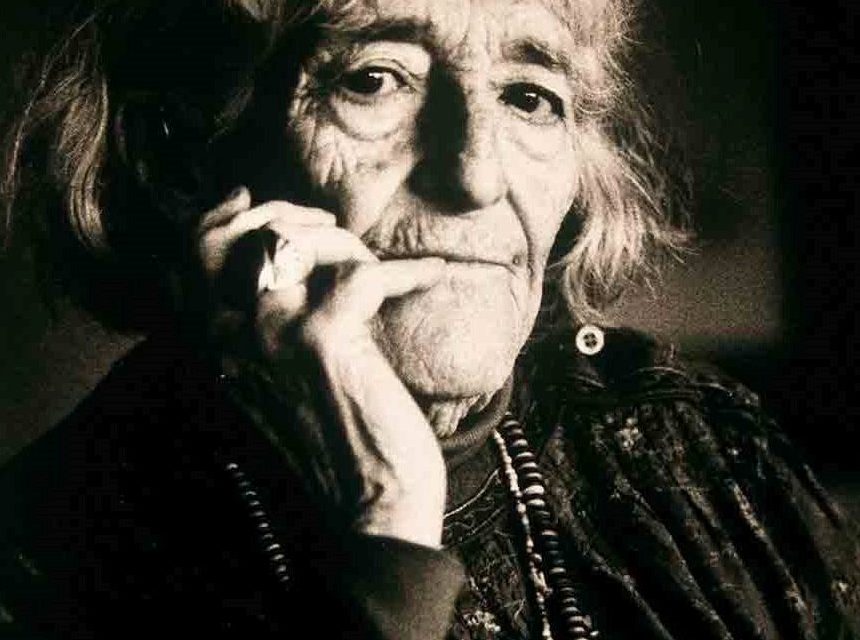 When I discovered woman writer Meridel Le Sueur (1900-1996) in Joy Harjo’s recent memoir, I mentioned her to my sister, Theresa who said yes, she had heard of Le Sueur and had purchased a few of her books at an event in her town a while back. She mailed these books to me.

After reading and writing about Le Sueur’s novel The Girl, an entirely powerful and empowering book, I was eager to read the three slim volumes I had received from my sister. In this post, I share a mere slice from each amazing work.

The four works of hers I’ve read are but the tip of a VERY large iceberg:

“Le Sueur created a wide-ranging body of work—essays, histories, short stories, poetry, novellas, and novels—from the 1920s through the mid-1990s. Her literary reputation was established in the ’20s and ’30s through her short stories, the acclaimed novella The Horse (1934), and her searing reportage of the plight of farmers and the unemployed during the Depression, including the classic “Women on the Breadlines” (1932).

“Blacklisted during the McCarthy era, Le Sueur disappeared from view. In the late 1970s, however, her poetry and short stories began to reappear in new editions published by small leftist and feminist presses”(Geyh 81).

My understanding is that while Le Sueur was low profile during the McCarthy era, she didn’t stop writing, but successfully wrote a series of children’s books.

Interestingly, Le Sueur rarely created anything alone. Even her novel The Girl is a compilation of many women’s stories that the author pieced together. Hers was truly a voice of and for the people.

“This refusal of single authorship might be seen as an outgrowth of Le Sueur’s critique of the individualism that has long been seen as a hallmark of the American character.

“In Democracy in America, Alexis de Tocqueville coined the term “individualism”…to define a tendency in the character of Americans, observing that ‘they acquire the habit of always considering themselves as standing alone, and they are apt to imagine their whole destiny in their own hands. Thus, not only does democracy make every man forget his ancestors, but it hides his descendants and separates his contemporaries from him; it throws him back forever upon himself alone, and threatens in the end to confine him entirely within the solitude of his own heart’”(Geyh 84).

This extreme “individualism” described by de Tocqueville is in direct opposition to Le Sueur’s approach to writing, the content of her work, and the way she lived her life. There is no forgetting of ancestors or separation of descendants and peers in Le Sueur’s world and work. There is collectivism, collaboration, and connection, all concepts with Latin roots that mean together. 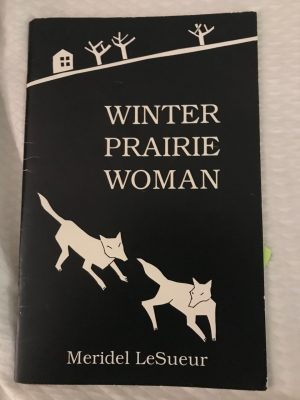 The first book I read from Theresa is Winter Prairie Woman, a very slim book and therefore a short story.

Le Sueur informs us in the Preface that:

“This is a collective book. This means it is not a performance by one author in a room alone.

“Like a tree it was made by a communal movement of root, stem, flower and seed by a group of creators together summoning a communal work.”

By this Le Sueur includes every other person who played any part in the production of the book, from the editor to those who had a hand in making the paper. There’s truth here: it takes many to create and publish a book.

Winter Prairie Woman centers on an elderly woman, clinging to life by a thread, alone in the family’s old farmhouse and land very soon to be leveled to make a “corporate farm.” It’s freezing cold in that run-down huge house, the woman alive due only to the kindness of neighbors providing a daily hot meal and some firewood.

Yet, truly, she is not alone in the house. The woman is surrounded by, and embodies, memories of life over the years, the many births, children’s voices and energetic movement, the hardworking adults managing the household and the farm, and the neighbors and village members coming and going. The woman recalls it all with every fiber of her being. And although close to the end of life, a life she knows so well, she does not lose hope:

“From her rocking chair the sun sprang from the windows moving from its southern path, from her lowly rocking she knew the exact position of the light and shadows as the spring equinox opened and the earth sprang around the sun. She could mark each month in all the forms of the shadow of the tree, the black bark swollen, one of the great trees, the great thrust of root, and she could feel them stir deep inside the short days. She could feel the bones warm. How many days and nights coming soon, all bursting out of bleak and cold and still alive in the dark bark, the buds of her body. She would bud from the rocking chair, spring out, spring into warmth. The spring winds blow through all the times of her body from a leaping girl, green, unbloomed, to the woman and the years of bearing and birth. Spring always came, was coming now through the slow dark and cold”(16).

Every day the woman hears and sees the shadows of the hungry wolves circling the house in the cold. As she awaits spring, the wolves await her. She recounts how she always fed the hungry wolves during these cold days, offering them anything she could muster.

The final image of this story offers the reader a real shock: after the woman falls back dead into the rocking chair, there happens a “devourment” by the wolves.

When the neighbor arrives the next morning with the woman’s breakfast, he sees a satisfied wolf exit the house.

“The whole front of her body was gone as if eaten off the bones of a plate showing the exposed bones. Strangely she had not fallen out of the chair and her neck and head were not severed. The old man said, “She is smiling,” and he saw her bringing in the vast platters of chicken and ham, the woman in her triumphant largess of feeding half the village at harvest and her pride at birth or death when the women, what was called, took charge. “I’ll be damned,” he said still standing in front of her. “I’ll be a son of a bitch. Pardon me, Missus, but I’ll swan if you don’t take the cake, feeding the goddamned wolves.” And tears came to his eyes and a strange unusual sweep of understanding at the generosity of women endlessly rocking”(30).

As I wrestle with this image, I can’t help but notice that Le Sueur has the wolves wait for the woman’s passage before they partake in one final act of her generosity, and this conveys mutual respect. A respect you don’t witness with the bank and the impending corporate takeover, humans not willing to wait for her passage before they pounce and devour.

One of the books Theresa mailed is a book of poetry, entitled Rites of Ancient Ripening, named after a notable poem of Le Sueur’s published in 1970. This particular collection of her poetry was published in 1975. 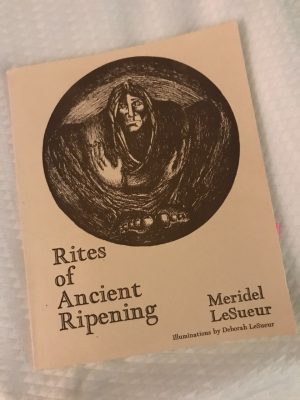 The “illuminations” in this book are by Meridel’s daughter Deborah Le Sueur.

Here’s a short excerpt from one of the poems, “I Hear You Singing in the Barley Ripe” that I feel exemplifies Le Sueur’s recognition and reminder of the continuum of life and the connectedness of us all. We, with all of nature, are part and parcel of a cyclical grand scheme.

In all differences and repetitions

Future ancestors in a rain of seed.

Future ancestors, each one of us, embodying differences to be honored and discovering comfort in the repetitive nature of life or the repetitive life of nature.

The third book in this bundle is This with my last breath.

The final section of this book supports the fact that Meridel Le Sueur ALWAYS wrote, composing the lines of this final piece while on her death bed, literally.

When I first read this piece, I largely discounted it because I figured she was dying and probably not thinking straight. That was honestly my thought process and that I thought this appalls me. Here this remarkable woman writer who spent her life and art in unison and service to others for the betterment of our society and world, wrote these words WHILE she was dying and I’m not listening?

So, I reread Le Sueur’s final words, what she conveys in writing with her last breath, after which I am left astonished, appreciative, and in great wonderment. Her endeavor to provide a glimpse, to bridge this life to what comes next, is astounding. 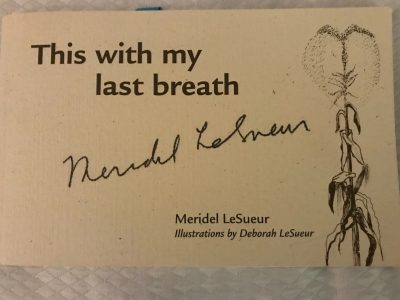 Illustrations in this book also by Deborah Le Sueur.

Substance tempo another kind of sleep…

My reality seems different…I am a stranger to

Myself…where are these alien feelings coming

O come to me…I am entertaining

some other person and nothing is familiar to me.”

Le Sueur has me wondering about the final revelation we experience of ourselves, with the falling away of so much. I’m amazed by her curiosity as she witnesses this rapid change of consciousness, a curiosity where I perhaps I’ve anticipated fear.

In the first section of this book, called First Breath, the Le Sueur family introduces their matriarch to readers. This section relays so much:

“She led a colorful and vibrant life…Throughout her life, she was part of the great social and political movements of her time. Her writing encompasses proletarian novels, widely anthologized short stories, partisan reportage, children’s books, personal journals, and powerful feminist poetry…

“Meridel believed her writing could be a bridge making connections across many different cultures. The diverse communities that identify with and celebrate her work are a moving testament to the depth and power of her writing”(7).

A few of her connections with other women writers that I know about are Joy Harjo, Adrienne Rich, Audre Lorde, and Tillie Olsen and no doubt there are many, many more, along with her vast readership. The bridges Le Sueur has built will endure as new ones continually develop.

Meridel Le Sueur was a #Nasty Woman Writer and Activist of a most powerful kind. 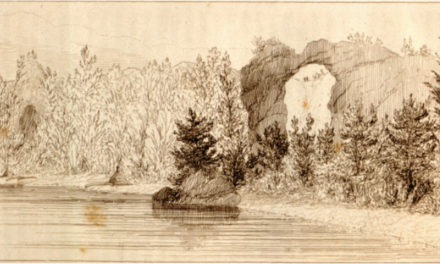 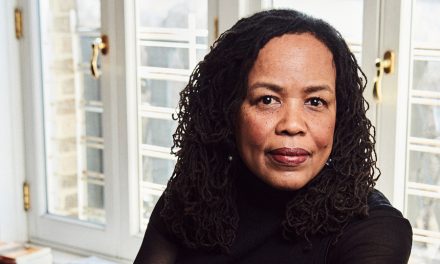 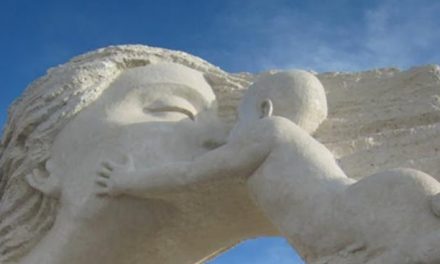 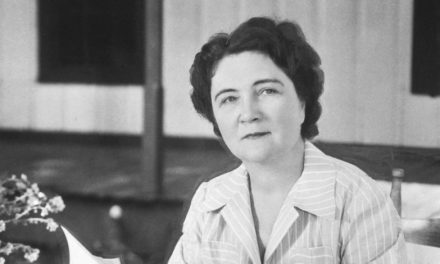