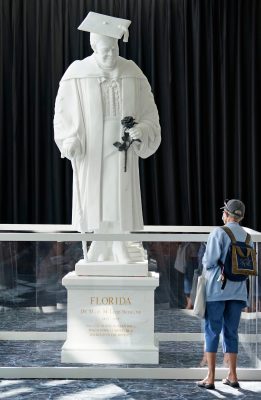 Sculpture of Mary McLeod Bethune on display in Daytona, Florida. Next stop, the National Statuary Hall in the Capitol Building.

The statue of Mary McLeod Bethune was officially unveiled in the US Capitol earlier this month, on July 13, 2022. Seems fitting to revisit this uplifting post from last October. Enjoy!

The crack in the bronze ceiling just got bigger with the 11-foot marble sculpture of Mary McLeod Bethune that will soon be making its way from Daytona, Florida to the U.S. Capitol Building’s National Statuary Hall in Washington, DC.

This sculpture of Mary McLeod Bethune represents the first black person ever displayed in this particular gallery in the Capitol. It will replace the statue of Confederate General Edmund Kirby Smith.

Living where I do in St Augustine, Florida, an hour north of Daytona, I caught this uplifting story on several news outlets the other day and had to follow up. This is my eighth post about the progress being made to break what is called the ‘bronze ceiling’, a term referring to the dearth of statues in public spaces depicting women.  Here are some of our posts about this issue:

Breaking the Bronze Ceiling: One Inspiring Public Sculpture at a Time

Welcome Controversy. We’ve Been Expecting You

Books Glorious Books: May You Know Them and Read Them!

Clearly, one of the ways we honor people for their contributions to society is to install statues, sculptures and monuments in spaces where people will see them, discover who they are, and be inspired by their accomplishments. Women are woefully underrepresented in this respect.

Establishing statues of real women, not mythical or fictional, in public spaces has picked up momentum along with the simultaneous removal of figures representing colonization, the Confederacy, and other symbols of atrocities and oppression.

Our Capitol’s National Statuary Hall collection is made up of one-hundred statues, two from each of the fifty states. With the arrival of this new sculpture, ten out of the one-hundred will depict women.

Bethune was born in South Carolina in 1875 to former slaves. She decided early on that she would learn to read even though a white playmate informed her that she could not, wrongly insinuating that she was not allowed. Out of seventeen children in the McLeod family, Mary was the only one to attend school, so she made it a point to teach her siblings all she was learning.

With the support and guidance of others she met along the way, Bethune continued her education in line with what was available to her and eventually ended up teaching. A staunch believer in the liberating power of education, in 1904 she started a school for girls in Daytona. Bethune, a master at speaking truth to power, was able to convince others to assist by donating funds, furniture, and unending support to what were to become lifelong worthy endeavors. Years later Bethune was successful in merging her school, Daytona Educational and Industrial School for Negro Girls with the Cookman Institute for boys in Jacksonville, to become what is still Bethune-Cookman University (The National WW II Museum). 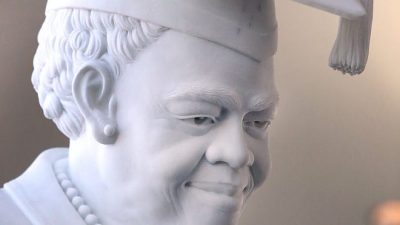 Close-up of Bethune’s face, where sculptor Nilda Comas “tried to capture strength, kindness, attentiveness and humility” that characterizes her subject.

The list of leadership roles Bethune assumed throughout her life is stunning.  She had a voice, a clear message, and a way about her that were extraordinarily influential.

According to the editors of the book Mary McLeod Bethune: Building a Better World:

“One of the few women college founder-presidents in the world, Bethune remained at the helm of Bethune-Cookman College for twenty years. Her leadership of the National Association of Colored Women (1924-1928) and the National Council of Negro Women, which she founded in 1935, solidified her imprint. From 1935 to 1943, as head of the Negro Division of the National Youth Administration, she channeled crucial “New Deal” funds into black education – secondary, collegiate, and vocational. With the ear of the First Lady Eleanor Roosevelt and President Franklin Roosevelt, Bethune was the foremost advocate within the administration for the inclusion of blacks at all levels of government. In 1936, she organized the Federal Council on Negro Affairs, popularly called “the Black Cabinet”(xii).

In addition to President Roosevelt, Dr. Bethune advised four other U.S. Presidents, one being President Harry S. Truman who appointed Bethune as “the only woman of color at the founding conference of the United Nations in 1945”(National Women’s History Museum).

Bethune was also a writer. She penned letters, documents, essays, and more, for newspapers, magazines, and all sorts of outlets. One of her final essays is My Last Will and Testament that she wrote in 1955, the year she passed. In this piece, she shares her legacy: nine “principles and policies in which I believe firmly.” The last principle is “I leave you finally a responsibility to our young people.”

“Our children must never lose their zeal for building a better world. They must not be discouraged from aspiring toward greatness, for they are to be the leaders of tomorrow. Nor must they forget that the masses of our people are still underprivileged, ill-housed, impoverished and victimized by discrimination. We have a powerful potential in our youth, and we must have the courage to change old ideas and practices so that we may direct their power toward good ends.

“Faith, courage, brotherhood, dignity, ambition, responsibility – these are needed today as never before. We must cultivate them and use them as tools for our task of completing the establishment of equality for the Negro. We must sharpen these tools in the struggle that faces us and find new ways of using them. The Freedom Gates are half ajar. We must pry them fully open.

“I have a legacy to leave my people, it is my philosophy of living and serving. As I face tomorrow, I am content, for I think I have spent my life well. I pray now that my philosophy may be helpful to those who share my vision of a world of Peace, Progress, Brotherhood, and Love”(McCluskey 61). 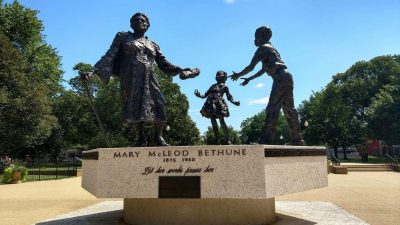 Bronze sculpture of Bethune with children, dedicated in July of 1974 in Lincoln Park, Washington, DC.

The installation of this new statue in the Capitol isn’t Bethune’s first jab at the bronze ceiling. In 1974,

“the Mary McLeod Bethune Memorial in Lincoln Park was the first memorial to honor an African American built on public land in Washington, DC, and it was the first portrait statue of an American woman on a public site in the city”(National Park Service).

The statue of Bethune in Lincoln Park is bronze, but sculptor Nilda Comas, once she learned about Bethune the woman and all her accomplishments, declared she would work with nothing less than marble for this particular work of art.

Nilda Comas, an accomplished sculptor, grew up in Puerto Rico and attended college in Texas. Comas earned an MFA from the New York Academy and attended the Accademia de Belli Arte in Carrara, Italy. She now divides her time between Fort Lauderdale, Florida and Pietrasanta, Italy.

“Bethune continues to galvanize black women, as Florida Representative Val Demings explained in celebrating Bethune’s selection for the Capitol: “Mary McLeod Bethune was the most powerful woman I can remember as a child. She has been an inspiration throughout my whole life”(Jones).

The 11-foot marble likeness of Bethune will assist in fulfilling our responsibility to our young people, who on their school U.S. heritage tours and vacations with their families will look up to and be inspired by “one of the earliest black female activists that helped lay the foundation to the modern civil rights movement”(The National WW II Museum).

Mary McLeod Bethune is a #Nasty Woman Writer and Activist whose legacy lives on in a tall way. 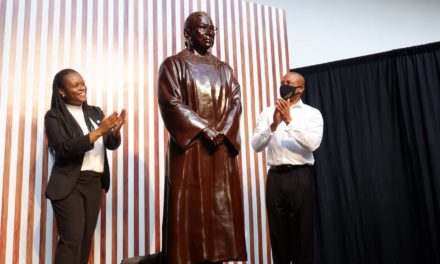 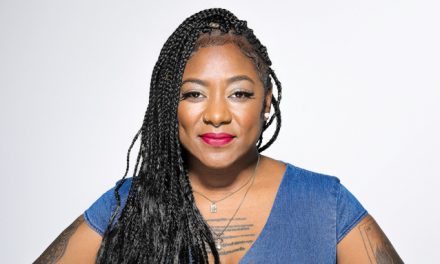 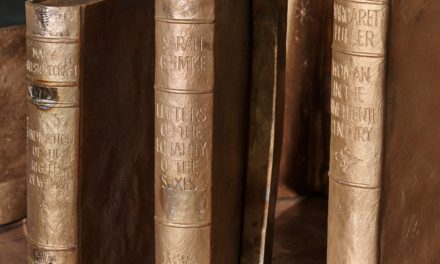