Alice Catherine Evans: “I Went Beyond the Realms of Your Perceptions” (American Woman Microbiologist 1881-1975)

“In the poverty of your imagination it is easier to believe that the printed word is gospel truth. I went beyond the realms of your perceptions”(Burns 56).

In an infuriating assault on her work and discovery, Microbiologist Alice Catherine Evans was asked repeatedly to explain why, if her findings were true, hadn’t anyone else discovered them. What can we infer from this grossly unfair question? That someone else meant a man? Why hadn’t a man discovered it. If it was so obvious, a man would have surely already thought it, discovered it. Not a woman. A woman couldn’t think something a man hadn’t already thought! And if she did, it couldn’t be true.

The opening quote, which Evans had wished to say in response to that question, she wrote in her private diary. She didn’t say it aloud. She held her tongue, calmly presented the information once again and encouraged anyone who had doubts to carry out the same study she had and see if they got the same results. For 20 years she did this, until her findings were finally accepted.

It’s exhausting to be a woman or any minority in the patriarchy.

In the early part of her career as a microbiologist, Alice Catherine Evans discovered a disease that was passed through the raw milk of cows and was making many people sick. This disease was called undulant fever (Brucellosis) and is caused by a bacteria (Bacillus abortus) in the raw milk that also infected the cows. The disease had been previously detected in goats, specifically on Malta and was aptly called Malta Fever. Evans proved that cows also carried this bacteria and transmitted the same disease. At the time of her discovery,  this disease was being misdiagnosed and mistreated. Evans worked hard to try to educate doctors and recommended pasteurizing all milk to eliminate this health risk but,  because she was a woman, lacked a Ph.D and was up against the dairy industry, she could not get herself or her findings taken seriously for over 20 years.

Alice Catharine Evans was born in Neath, Pennsylvania in 1881, of a long line of Welsh immigrants. Options were very limited for women at the time of her upbringing but her mother managed to get her into a school that educated women to become teachers, one of the only jobs available to women at the time.

At the school Evans participated in one of the first all-women’s basketball teams in the country.

“All of the players knew it was considered unladylike, and the townspeople were shocked, but the team practiced diligently anyway. The women stepped into baggy bloomers made of wool flannel, topped with black sweaters, thickly knitted, long-sleeved, and turtle-necked. The letters, S.C.I., blazed in red across their chests. They pulled on black stockings and high-topped shoes with rubber soles. Instantly, the players steamed in the oppressive uniforms. Modest as the outfits would look today, disapproving conservatives shook their heads and wondered why nice girls would show their legs and parade themselves so!” (Burns 14)

Following graduation Evans returned home to teach in a small one room schoolhouse, but she soon tired of it. When the School of Agriculture at Cornell University offered a training course in Nature Study tuition free to rural schoolteachers, she grabbed it. Upon completion of that course of study, Evans was offered free tuition for her undergraduate if she agreed to go on to study pure science.

“Our country’s need for scientists coincided exactly with Alice’s dawning vision for a career. Cornell University, leading the country in agricultural research at this turn of the century, announced a new policy. Students had to specialize, either in dairying, animal husbandry, and the like, or bacteriology. Alice scanned the bulletin’s next paragraphs. Yes, there it was! Students majoring in bacteriology would have free tuition!” (Burns 26)

Once again, Evans seized the opportunity.

From there she went on to get a graduate degree at the University of Wisconsin, after which she began to look for a job.

“In 1910 she was a rarity—a woman scientist. If she had anxious moments, she was being human. What, she thought, if jobs in labor and the professions continue to be dominated by men? Would she end up, dispirited, listening to glassy-eyed schoolchildren recite multiplication tables? Society already looked upon her, at 29 years old, as an old maid who defied convention. After all, hadn’t she chosen a career which ordinary women and men did not understand?”(Burns 38)

Yes, Alice, over 100 years later, jobs in labor and the professions continue to be dominated by men.

She landed a job in the Department of Agriculture and eventually moved to D.C. to participate in studies on the manufacturing of butters and cheeses. Pasteurization was in its early days. That is where Evans became interested in the phenomenon of bacteria in freshly-drawn milk and made her discovery.

“She could not have dreamed of the frustration and anguish she would endure as distinguished medical men disputed her speech and the subsequent publication in the scientific journal relating her discovery of the twin microbes. They questioned her ability and her integrity. Men who had invested in the dairy industry even suggested Alice had made deals with the manufacturers of pasteurization equipment.”(Burns 84)

Along with all the other issues and hardships she faced, a prominent scientist named Theobald Smith strongly opposed Evan’s work. In the biography about Evans, Gentle Hunter, the author, Virginia Burns, states it is unclear why. Smith continually sabotaged her work.

During this time, Evans contracted chronic undulant fever and was in and out of the hospital with it for years. At 82 she was asked to write her memoirs. They included these paragraphs:

“I am sorry this chapter may be painful to friends of one of the most eminent bacteriologists. Among great scientists Theobald Smith is not alone, however, in his resistance to a new scientific idea.

“Scientists are probably the most objective of researchers. Unfortunately, they can be influenced by their social system. I was a newcomer in the field where he [Dr. Theobald Smith] was regarded as an authority…and he was not accustomed to considering a scientific idea proposed by a woman.”(Burns 131) 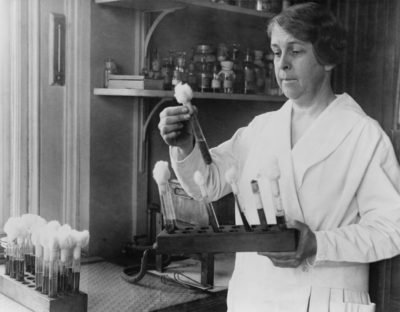 Evans was finally vindicated in 1930 when a doctor took her seriously and uncovered more than 70 cases of undulant fever in his immediate area. Today as well as pasteurizing milk there is a specific protocol for identifying and treating the disease.

In spite of all of this, Evans enjoyed a long and successful career as a bacteriologist. Today she would be called a microbiologist. She was the first woman scientist to have a permanent appointment in the U.S. Dairy Division of the Bureau of Animal Industry.

She worked for the National Institute of Health at its inception. Due to her findings, in 1930 pasteurization of milk became mandatory in the U.S. dairy industry. In 1928 she became the first woman president of the Society of American Bacteriologists. These are only a few of her accomplishments. She was met well internationally, traveled and spoke internationally and many scientists, male and female, from other countries collaborated with and her, appreciated her work and expressed such to her.

The following poem from the book, Nasty Women Poets inspired me to learn more about Alice Catherine Evans and write this post.

For Alice Evans (1881-1975), who discovered brucellosis, a disease carried by bacteria in fresh milk. Her work was disparaged for years by Theobald Smith. Like Marie Curie, she contracted the disease she studied.

It is in the milk, I tell them, the milk;
the goats on Malta, all the young
British recruits away from their own island
for the first time, buried on rocky cliffs
the goats hug in the fog.
It is in the milk, I tell them:
the swine losing their unborn
children in red clay. Afternoons
I bicycle up the hill along the fence
counting the dead with each press
of each pedal. It is in the milk
that goes into hard cheese, that feeds
our cousins in Wales, in Pennsylvania,
that makes them cough and sweat
and call us home. They won’t
listen. I know the cause
of these ailments: a monster,
this small, can be dealt with.

All these lives, the most common
breakfast is danger, a runaway train
coming on fast; I alone know how
to work the brakes. Stop
the milk, I tell them. The milk.
Theo, you tiger, have a child
for God’s sake, watch her choke
on your arrogance. Dairymen
you disown me, stranger in your field,
I who traipsed over long grasses,
watched the cattle fainting,
your wives with cold washrags
Sunday evening. I have drawn milk
from your cow’s udders with my own
hands. I have tasted this infection.

Twenty-three years I have been telling you
how we become ill. You stand by,
animals nuzzling your waist,
dying of a disease I can name,
chide me as a witch.

Alice Catherine Evans is a #Nasty Woman of STEM. 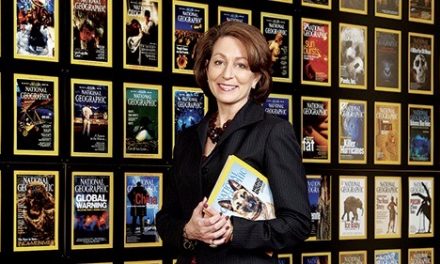