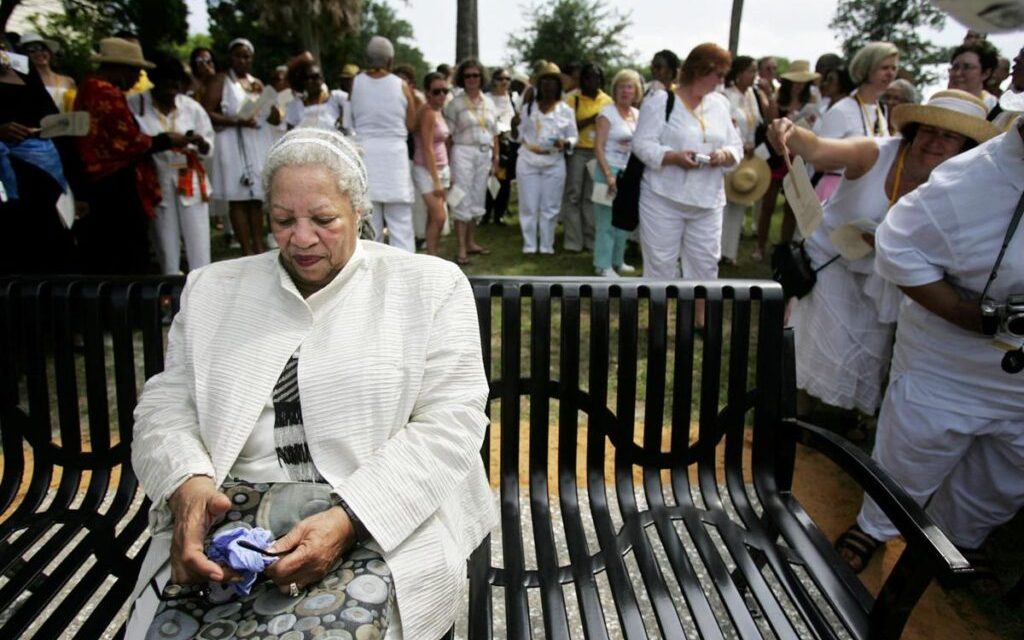 In several interviews after the publication of her 1987 novel, Beloved, Toni Morrison laments the lack of awareness and homage to the victims of the Middle Passage.

What is the Middle Passage?

Brittanica defines the Middle Passage, as “the forced voyage of enslaved Africans across the Atlantic Ocean to the New World. It was one leg of the triangular trade route that took goods (such as knives, guns, ammunition, cotton cloth, tools, and brass dishes) from Europe to Africa, Africans to work as slaves in the Americas and West Indies, and items, mostly raw materials, produced on the plantations (sugar, rice, tobacco, indigo, rum, and cotton) back to Europe. From about 1518 to the mid-19th century, millions of African men, women, and children made the 21-to-90-day voyage aboard grossly overcrowded sailing ships manned by crews mostly from Great Britain, the Netherlands, Portugal, and France”(https://www.britannica.com/topic/Middle-Passage-slave-trade). 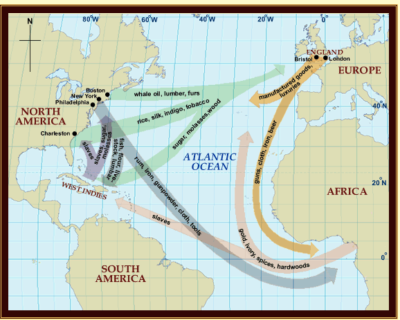 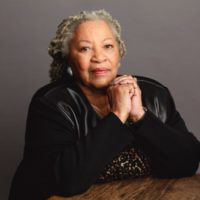 “It’s like the history of the middle passage,” Morrison said in an interview with Angels Carabi  in the journal Belles Lettres in 1994, “All those people who threw themselves into the sea had been violently ignored; no one praised them, nobody knows their names, nobody can remember them, not in the United States nor in Africa. Millions of people disappeared without a trace, and there is not one monument anywhere to pay homage to them, because they never arrived safely on shore. So it’s like a whole nation that is under the sea. A nameless, violent extermination.” 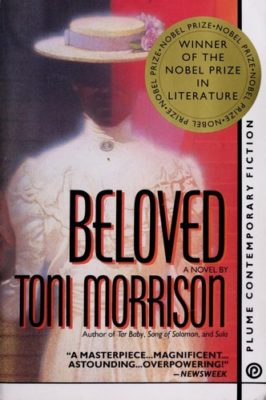 Beloved, by Toni Morrison
published in 1987

“I was traveling around the United States after Beloved came out. Everywhere I would go, there was a picture of a confederate soldier on a horse in the middle of the town. Everybody has a monument to every little thing . . . there is a huge wall to all the veterans . . . but there is not one bench where we can sit down and think about those people. There is now some effort to do that, but it’s like you don’t have to pay respect to your ancestors. They are just waiting there for you to ask them to do something, but if you don’t know them, don’t honor them, don’t think of them, mourn them, or praise them, then you are like a cripple. A public monument or a private monument is needed, not just to the ancestors we know, but to all those we don’t. That’s a big gap, a disjunction in the history”(https://belovedcriticaledition.wordpress.com/background/).

In reading these interviews while preparing a post on Beloved for #Nastywomenwriters recently, I wondered if anything had changed after Morrison  made these pronouncements and wow, was I pleasantly surprised when I went to look.

Most compelling is the Middle Passage Ceremonies and Port Markers Project which interacts directly with Morrison’s wish. Ann L. Chinn the Executive Director and project founder writes that in 1986 she was “offered the task, as a birthday gift, to figure out a way to honor the Africans who had died in the middle passage”(https://www.middlepassageproject.org/about-us/). 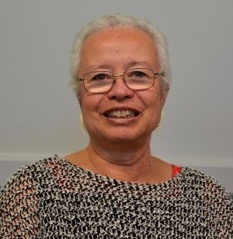 Chinn writes”
“Delving into the data has made me increasingly aware of how incomplete the appreciation of Black people’s presence and contributions to building this country is for many of us. Over the past decade we as a group of people have worked with various communities and people along the Gulf and Atlantic Coasts; thought seriously about how and why African ancestors must be commemorated; and learned a lot of history and its legacy.
For me, this Project has been truly a gift that now defines me, as clearly as my relationship with family and friends. It has matured and developed a uniqueness that highlights a shared experience, the Middle Passage. Our particular process of approaching specific areas to acknowledge their history and to encourage ancestral remembrance ceremonies and marker installations has altered my perspective on race, class, culture, national identity and responsibility” (https://www.middlepassageproject.org/about-us/).

The MPCPMP is incredible in its scope as well as its ability to remain local to place. The organization researches and identifies ports of entry for victims of the Middle Passage and encourages communities to hold remembrance ceremonies. MPCPMP installs historic markers at important locations, provides educational work within communities and partners with larger historical and cultural societies including colleges and other academic institutions to have a broader outreach. The website itself is very informative with a list of documented arrival sites, past and occurring events  and a blog that offers monthly updates and articles. 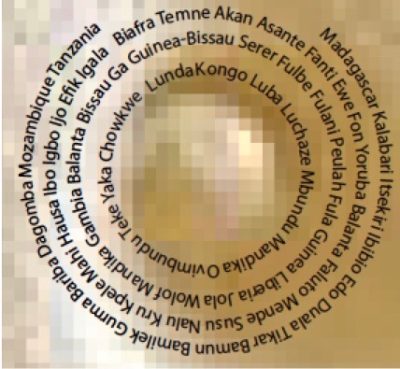 And it seems to be in direct response to Toni Morrison. The following was posted on August 15, 2019, following her death on August 5:

A Haunting Responsibility and Connection: A Tribute to Toni Morrison
Posted on August 15, 2019 by Emily Kugler

“Toni Morrison is being praised this week for her life’s work as an iconic Black American Woman author. At her passing, many have noted how the Nobel Prize winner chose to view the lives of Black people clearly beyond the “White gaze.” For those in the Middle Passage Ceremonies and Port Markers Project (MPCPMP), however, she directly inspired us to address the history of captive African ancestors who died in the transatlantic crossing.
More than 30 years ago, the great author expressed to her friend Rudy Lombard, a former MPCPMP Advisory Board member, that little or nothing had been done to pay homage to those lost in the trauma of the Middle Passage. She expressed the great need for commemoration and healing to confront this violent history. In 2011, the Project was established as a non-profit organization. MPCPMP encourages communities to hold remembrance ceremonies and install historic markers to honor the lives of the estimated two million children, women, and men who perished and the ten million who survived the transatlantic trade”(https://www.middlepassageproject.org/2019/08/15/a-haunting-responsibility-and-connection-a-tribute-to-toni-morrison/).

After the Project formally began, Ms. Morrison sent a letter on July 28, 2011, in which she wrote:

“It was a pleasure reading the proposal for your Middle Passage Project. I can see why Rudy Lombard is so impressed with it. I am as well.
Its impact, if successful, will resonate internally and re-cast conventional history with the narrative too frequently absent from it.
Please let me know if there is anything I can do to help”(https://www.middlepassageproject.org/2019/08/15/a-haunting-responsibility-and-connection-a-tribute-to-toni-morrison/). 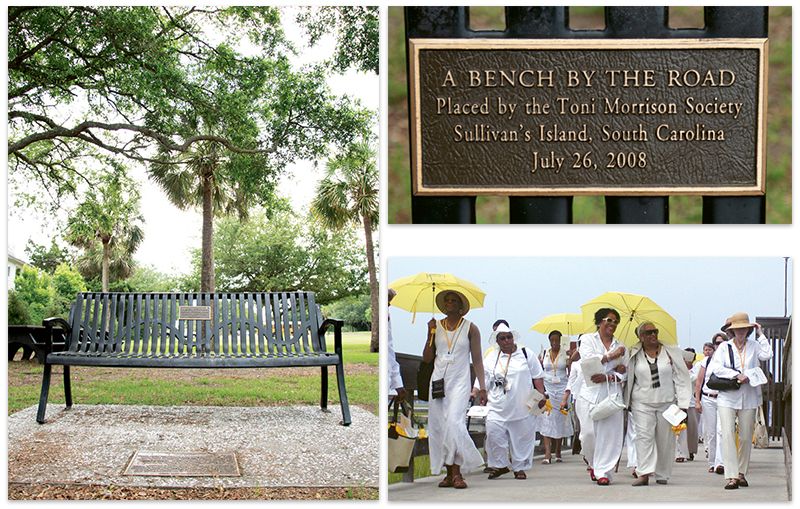 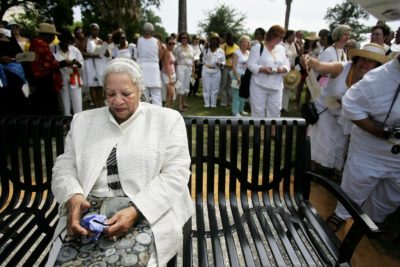 The role of Sullivan’s Island in slave history led author Toni Morrison to visit a decade ago. Above, Morrison rests on the bench placed by the Bench by Road Project at Fort Moultrie — a bench dedicated to enslaved Africans. File/Staff
Tyrone Walker

My sister, Maria Dintino, has written extensively on this site about the subject and importance of monuments in public spaces and many exciting new ones that have been erected. See A Tipping Point: Open Spaces in our Public Spaces, Books Glorious Books: May You Know Them and Read Them, Breaking The Bronze Ceiling: One Inspiring Sculpture at a Time, Margaret Fuller’s Centograph: “A Well Worn Path”, Visibility Matters: A Statue for Mary Wollstonecraft, The Awakened Woman:Reawakening and Reigniting Our Sacred Dreams by Dr. Tererai Trent, “The Phoenix Takes its Rest: Visiting May Sarton’s Grave

The second monument I would like to mention is the Ark of Return by Haitian-American Architect Rodney Leon at the UN plaza in New York City. This memorial was unveiled on the International Day of Remembrance of the Victims of Slavery and the Transatlantic Slave Trade on March 25, 2015. I have no evidence of it being related to Morrison’s plea but was happy to find it existed and  am impressed by the architect and the work. 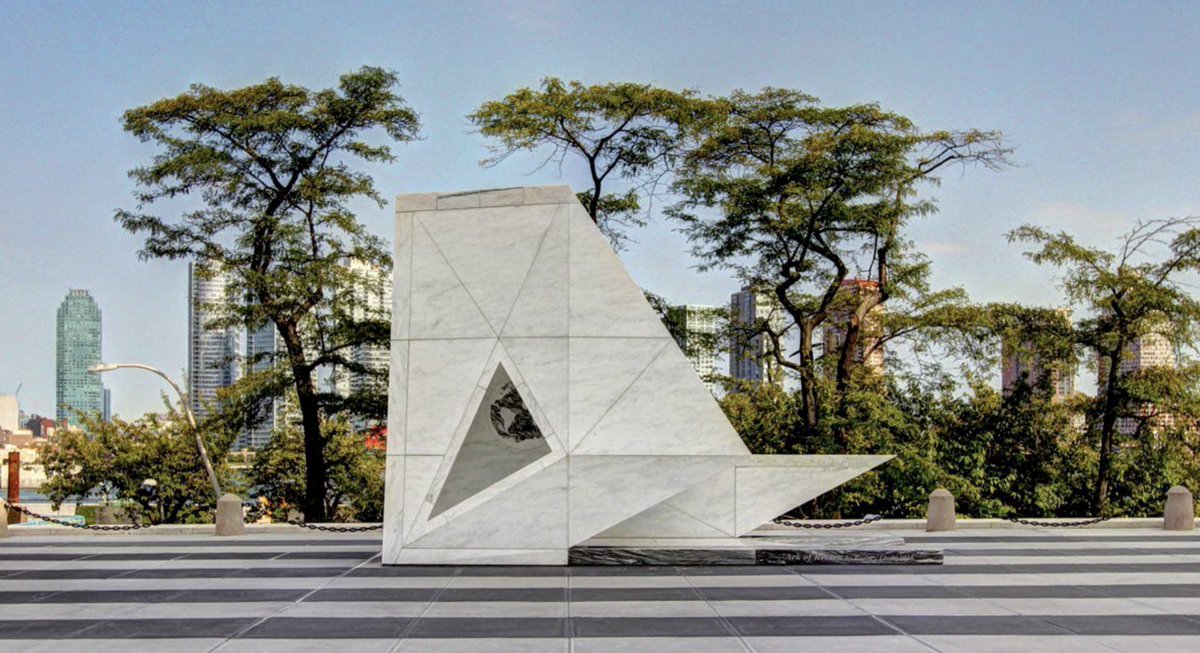 The Ark of Return by Rodney Leon
The Permanent Memorial was unveiled on 25 March 2015, which marks the International Day of Remembrance of the Victims of Slavery and the Transatlantic Slave Trade. The memorial, located on the United Nations Visitors Plaza in New York, will invite people everywhere to contemplate the legacy of the slave trade and to fight against racism and prejudice today. 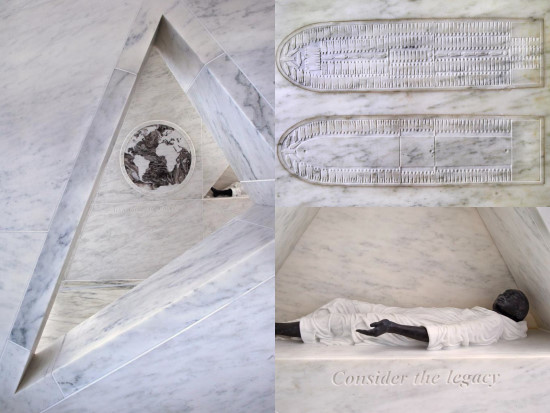 The Ark of Return by Rodney Leon

The memorial website explains:
“Visitors can pass through the Ark of Return to intimately experience three primary elements. The first element, Acknowledge the Tragedy, is a three-dimensional map that depicts the global scale of the triangular slave trade.
The second element, Consider the Legacy, is a full scale human figure lying in front of a wall inscribed with images of the interior of a slave ship. This element illustrates the extreme conditions under which millions of African people were transported during the Middle Passage.
The third element, Lest We Forget, is a triangular reflecting pool where visitors can honour the memory of the millions of souls who were lost”(https://www.un.org/en/events/slaveryremembranceday/memorial.shtml).

When Leon was asked why he named the monument the ‘Ark of Return’? He replied. 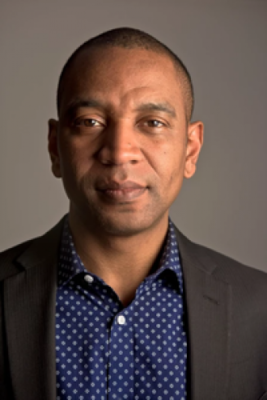 Rodney Leon, architect of the “Ark of Return” and the African Burial Ground National Monument

“In our research, one of the things that struck us most was the “Door of no Return” in Gorée Island, Senegal, where slaves held in captivity on the African coast went through before being shipped away. The idea of people being taken through that door onto slave ships and never to return was a very tragic image and we felt it would be a good counterpoint to establish a spiritual space of return, an “Ark of Return”, a vessel where we can begin to create a counter-narrative and undo some of that experience. The idea is that you are not necessarily returning physically, but there is a psychological, spiritual and emotional transformation, as well as a cleansing feeling through the process of moving forward to a place where humanity comes closer together”(https://www.un.org/africarenewal/web-features/historic-%E2%80%98ark-return%E2%80%99-monument-slavery-unveiled-un). 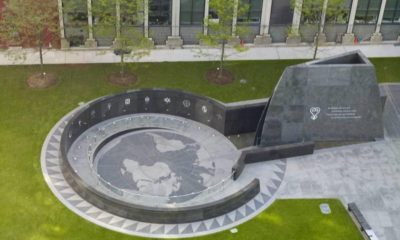 During construction for an office complex in lower manhattan in 1991,

“Preliminary archaeological research excavation found intact human skeletal remains located 30 feet below the city’s street level on Broadway. During survey work, the largest and most important archeological discovery was made: Unearthing the “Negroes Buriel Ground”- a 6-acre burial ground containing upwards of 15,000 intact skeletal remains of enslaved and free Africans who lived and worked in colonial New York. The Burial Ground’s rediscovery altered the understanding and scholarship surrounding enslavement and its contribution to constructing New York City. The Burial Ground dates from the middle 1630s to 1795. Currently, the Burial Ground is the nation’s earliest and largest African burial ground rediscovered in the United States”(https://www.nps.gov/afbg/learn/historyculture/index.htm). 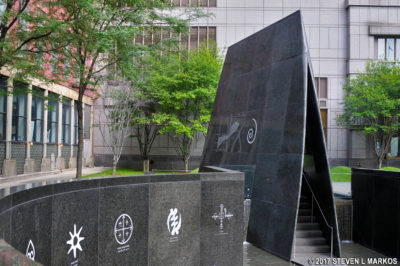 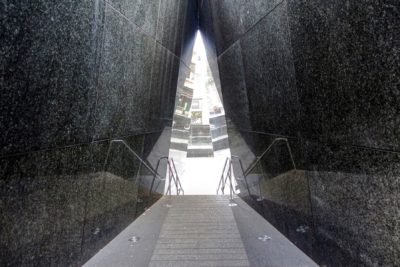 “A competition was held, and hundreds of entrants were narrowed down to six finalists. The winning design would be awarded to Rodney Leon and AARIS architects. In 2007, the Ancestral Chamber was completed and “serve to physically, spiritually, ritualistically and psychologically define the location where the historic re-interment of remains and artifacts of 419 Africans has taken place.” (AARIS architects) For a description of the seven elements and to read more about the symbols on the monument, click here.

In an interview with Beyond The Built Environment in 2020,  Leon calls it his “proudest professional accomplishment”(https://www.beyondthebuilt.com/rodney-leon).

I can sure see why. I look forward to visiting both of these monuments when I am next in New York City. Thank you Mr. Leon and thank you Toni Morrison, again and again and again. 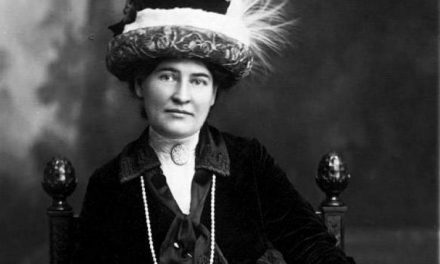 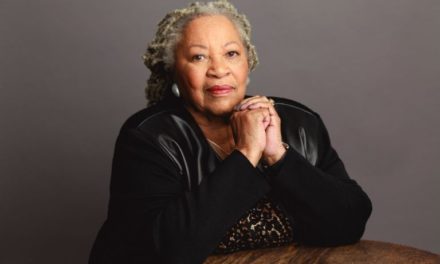 Toni Morrison’s Sula: Available to and for her own imagination—a rare kind of freedom and a black woman writer’s manifesto.