National Indigenous Peoples Day is being celebrated across the United States this week.

In the spirit of this long-overdue recognition and celebration, I offer a slice of the true story of a national figure, Osceola, a Seminole Indian leader.

We begin with Joy Harjo, whose ancestors loom large. (Read our post about Harjo, US Poet Laureate here.)

One ancestor Harjo mentions in her memoir Crazy Brave especially captured my attention:

“Osceola, the Seminole warrior who refused to sign a treaty with the United State government, was our uncle…I see Osceola’s mother, Polly Coppinger, as she stands there with her hands on her hips and a reddish glint to her black, heavy, kinky hair. She was born during times of great transition for the Mvskoke Nation. She was charismatic, with a decided stubbornness, and passed this on to her son”(21). 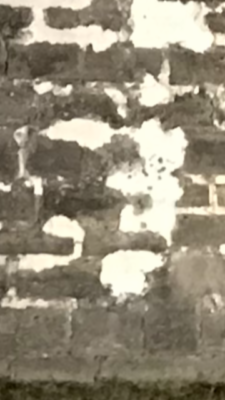 On one of our annual visits to St Augustine, Florida, we booked a walking ghost tour. As we stood at the Castillo de San Marcos, our tour guide pointed out markings on the fort’s outer wall that resemble a face. Her lantern swaying slightly, she said that it was Osceola’s face, the Seminole chief imprisoned there in 1838. After that, whenever I passed the fort at night, I’d note the image of that solemn, stoic face, the imagined face of a man I knew nothing about.

Living in St Augustine, one is surrounded by references to this legendary warrior: Osceola County, Osceola Elementary School, Osceola National Forest, and more. On learning that Osceola is an ancestral uncle to Joy Harjo, I had to find out more.

According to historian Patricia R. Wickman, in 1716 Polly’s grandfather, James McQueen, settled among the Muskogee or Creeks, marrying a Creek woman. Wickman informs that “intermarriage would have strengthened his [James McQueen’s] influence”(8), and indeed he did become very influential. It is said that one of McQueen’s daughters, Ann, “raised a daughter by one Copinger, and called her Polly. She was the mother of Ussa Yaholo, or Black Drink – but more widely known as Osceola”(qtd in Wickman 8).

“By the time of Billy’s birth, many of the townspeople were mixed-blood Indian/English/Irish/Scottish, and some were black as well. Osceola himself was all of these. Some undoubtedly spoke English and gave the boy an opportunity to become acquainted with the language…Billy Powell was born into an era when whites were making their first obvious cultural and genetic impact upon the Indian tribes of the Southeast. As a result, he grew up “between” two cultures”(xx).

Although between two cultures, Billy would have been most strongly influenced by his mother’s family: “the Creek and Seminole affiliation was matrilineal, and therefore almost certainly Osceola recognized the clan of his great-grandmother, the Tallassee woman who married James McQueen”(9).

In addition to this influence, Wickman explains, “Many of his day – and of his own family – rebelled early and more violently and renounced the white culture entirely. Osceola spent his life attempting to walk a fine and tenuous line between the two”(xx).

Mother Polly and ten-year-old Billy (Osceola) stayed in Florida, joining the Seminoles, a relatively newly formed Indian tribe, roughly 50 years old at the time, although ancestors of this conglomerate had lived in on this land for over 12,000 years!

“Seminole history begins with bands of Creek Indians from Georgia and Alabama who migrated to Florida in the 1700s. Conflicts with Europeans and other tribes caused them to seek new lands to live in peace.

“The 1770s is when Florida Indians collectively became known as Seminole”(https://dos.myflorida.com/florida-facts/florida-history/seminole-history/).

“We gathered from across Florida, Georgia, and Alabama; those borders did not exist for us. Our culture, our home, and our way of life joined us together. We defended our homes and our people, and we became a refuge for those who sought freedom from conquest and slavery. For this, we were seen as a threat.

“We could not be controlled by the Spanish or brought into their mission colonies. They called us cimarrones, the Spanish word for “runaways” or “wild ones”. Some of us saw the name as an insult, some saw it as a badge of honor”( https://www.semtribe.com/STOF).

Between the ages of 15-17, during an annual Green Corn Dance, purification and manhood ceremony, Billy was given the name “asi:yaholi, or as whites would variantly pronounce it, Ussa Yaholo, Assiola, or Osceola”(xxi), literal translation, Black Drink Singer.

Thus began Osceola’s incredible ascent in the Seminole tribe and in the psyche of a fractured country.

Often referred to as chief, Osceola “lacked the hereditary credentials necessary for the Indians to recognize him as an official leader”(xxi), yet he possessed a background and qualities that made him a rising star. These qualities gave him “visibility among the Indians…notoriety among the whites.” Osceola demonstrated great persuasion and passion in his “beliefs and in his speech”(xxii).

Physically, he was commanding, a “handsome man, about five feet ten inches tall and slender” and he liked finery and had his own memorable style. 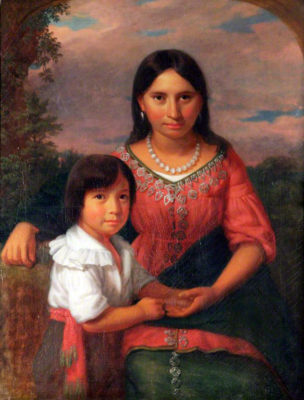 Believed to be one of Osceola’s two wives, with one of his five children.

Osceola could both work a room and a battlefield. He knew both sides and had an ultimate objective, that his people not be pushed out: “trying to prove to whites that he would not, under any circumstances, be forced out of the home which he claimed in Florida and at the same time, trying to show that he could live in peace with the whites…it seemed clear that Osceola’s attitude of armed defiance was not aimed at white individuals or settlers per se but at the concept of forced dispossession”(43).

Osceola’s view was that the “enemy was the United States government, and not necessarily each individual white American. We have ample proof throughout Osceola’s life that he was capable of making the distinction”(12). This approach elevated Osceola in everyone’s eyes.

The press often labeled him “Master Spirit of the Seminole Nation,” but the Seminoles had more of a “horizontal power structure,” involving many leaders. These leading warriors were masterful and “employed a range of innovative tactics. Nighttime assaults, long-term sieges, and even amphibious attacks were utilized – tactics that necessitated high-level planning, discipline, and precise timing”(174).

“Osceola thus appears to have followed the earlier stricture of Tecumseh, that Native people should abandon the custom of killing women and children in wartime. While whites were indeed wounded, killed, and even tortured, the absence of mass carnage among the settler community certainly adds credence to this assumption”(Monaco 174). 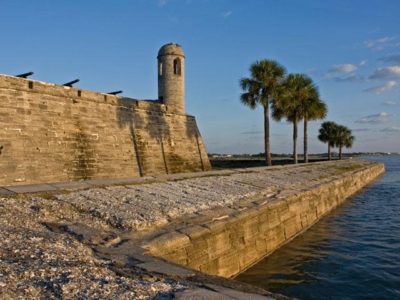 Current photo of Castillo de San Marco, known as Fort Marion in 1837 when Osceola and other Seminoles were held prisoner there.

Well into the Second Seminole War, with trust shattered on both sides, Osceola and some of the Seminoles, approaching under a white truce flag, were captured on October 21, 1837 and imprisoned in Fort Marion, as Castillo de San Marco in St Augustine was named at that time.

If Osceola was not so sick, stricken with malaria and quinsy, he may have made the escape along with Coacoochee (Wild Cat) and the twenty others who jumped into the moat and fled.

After three wars with the Seminoles, an end was called to the military action. Although most had died or been relocated, a few hundred Seminoles remained in Florida, many having sought refuge in the Everglades, territory the whites found unbearably inhospitable.

The Seminoles never surrendered and as they stress on their website, are “The only Tribe in American who never signed a peace treaty.”

After the fort escape of 1837, the remaining imprisoned Seminoles were moved to Fort Moultrie, in Charleston, South Carolina where Osceola died on January 30, 1838 at the age of 34. His headless body is buried there, his head taken by the physician attending him, Dr. Frederick Weedon. Controversy still swirls around this final act and where he remains buried, many believing he belongs in Florida.

It appears Polly Coppinger did pass her charisma and stubbornness onto her son, Osceola, “a visionary” and a “charismatic” person (Wickman xxii). Osceola continues to inspire and is clearly more than worthy of all the places named in his honor. 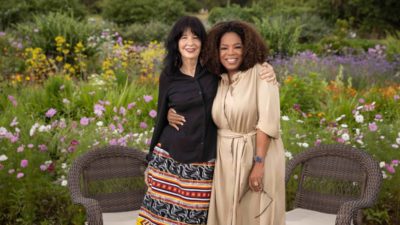 We wrap with one of Harjo’s poems, “The Fight”, from her recent book of poetry, An American Sunrise:

The rising sun paints the feet

And they scatter into the burning hills.

I have fought each of them.

I know them by name.

From before I could speak.

To make them retreat.

Yet they return every night

If I don’t keep guard

They elbow through opening in faith

Tear the premise of trust

And stick their shields through the doubt of smoke

I grow tired of the heartache

Of every small and large war

But it is not in me to give up.

Which cannot exist without the house of the peacemakers. 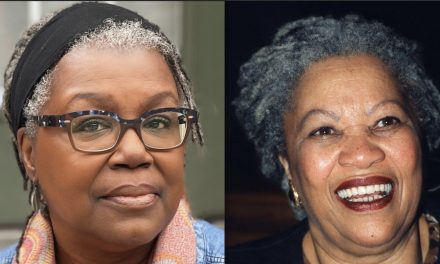 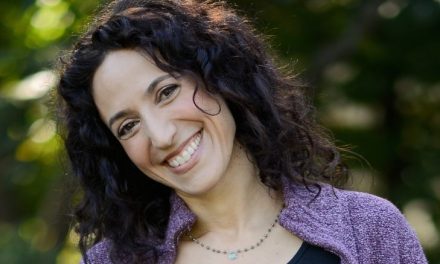 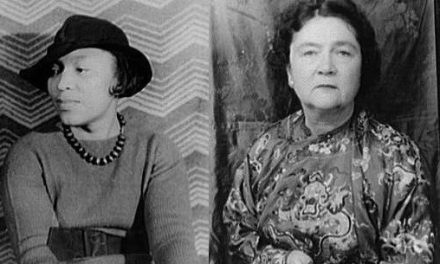 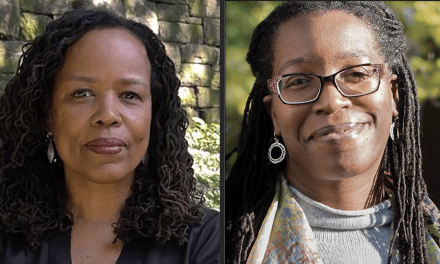